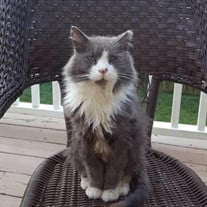 Tom Clarence passed peacefully at his residence and crossed The Rainbow Bridge on Thursday, February 18th after an extended illness. Tom was an avid hunter, bringing birds, mice, rats, bats, frogs, snakes, moles, squirrels, and rabbits home as his trophies (and occasionally, a snack.) Had he been given the opportunity to live near a body of water, he would certainly have been an avid fisherman as well. He was preceded in death by his canine adopted siblings, Molly and Max of the home. Tom lived fearlessly and on his own terms, navigating life mostly outdoors and demanding respect from all he encountered. His hobbies were napping, rejecting most cat food he was given, and slapping the ankles of people deemed unworthy to be in his presence. He was particularly fond of dairy products in his later years and thoroughly enjoyed milk, yogurt, whipped cream and mayonnaise. Later in life, he was undeterred to be given a death sentence at age 18 and lived 4 years and 3 months longer to prove a point. Had his body kept up with his stubborn streak and strong will, he would still be with us today. Tom is survived by his Chief of staff, Rhonda Lacey, who loved him greatly and was fiercely loyal until the end. He is also survived by his Secretary of the Interior, Bucky Peters, who also cared for him despite his public displays of disdain. His Secretary of Foreign and Domestic Affairs, Christy Hopkins, also survives. His canine brother Opie and feline sister Ellie of the home also survive. Though he mostly tolerated them, both came to be constant companions in his last days. A private celebration of life service will be held at the home on Friday, February 19th. Per his family's wishes, Tom will be cremated. Adored Pets Cremations in Elizabethton is in charge of arrangements. The family would like to thank the staff at Appalachian Animal Hospital in Piney Flats, particularly Dr. Karen Stone and Dr. Sally MacLane, who cared for him throughout his life, including the last several years in hospice care. An additional thank you is extended to neighbors Jenna and Emmitt O'Brian for sharing their treats and front porch. In lieu of flowers, the family requests that you make a donation of food or monetary donation to your local animal shelter.

The family of Tom Clarence Lacey created this Life Tributes page to make it easy to share your memories.

Tom Clarence passed peacefully at his residence and crossed The...