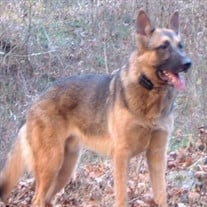 Thor was born Nov 28, 2007 and was soon adopted into his first home. His first family wasn’t prepared for the antics of a high-drive German Shepherd puppy. After multiple attempts at rehoming, he finally found a forever home with Bob and Kim Mayhew of Green Mountain, NC when he was just 6 months old. Thor went to the Rainbow Bridge on his adoptive mom’s birthday, July 4, 2017. He was met there by his girlfriend Cleopatra, canine family members Dixie, Bess, Sam, Waya, and Gabriel, and special feline brother Gunther. Thor was all German Shepherd Dog, loyal and protective to the end. He was chief security officer at Wolf Song Ridge and worked part-time as a personal trainer for his feline family members, making sure they stayed well-practiced in running and climbing. He was known as Uncle Thor to a litter of foster orphaned puppies, as he was very helpful in herding them from the porch railing when they were old enough to go exploring as well as being an excellent role model for them. No stick was ever too large to retrieve for Thor and he found his greatest joy running the hills and creeks around his home. Thor left huge pawprints to fill, both on the ground and in the hearts of those who knew and loved him. In addition to his adoptive parents, Thor leaves behind his canine brothers Levi, Copper, Cody, Doc, Atticus, and Sir Winston Pugsley; his canine sisters Mocha, Schotzie, Athena and Phoenix; and 12 feline brothers and sisters . His whole family looks forward to a reunion at the Rainbow Bridge. Thor’s family is grateful for the caring final arrangements provided by Adored Pets Cremations. Thor was cremated on July 5th, 2017.

Thor was born Nov 28, 2007 and was soon adopted into his first home. His first family wasn&#8217;t prepared for the antics of a high-drive German Shepherd puppy. After multiple attempts at rehoming, he finally found a forever home with Bob and... View Obituary & Service Information

The family of Thor Mayhew created this Life Tributes page to make it easy to share your memories.