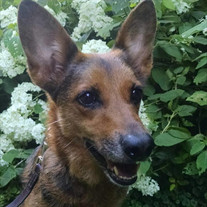 In the early morning hours of November 27, 2019, Schotzie took off on another adventure, but instead of running in the woods and creeks of her home she ran unexpectedly to the Rainbow Bridge during her peaceful sleep. No doubt she was met there by her partner in adventure crime, Atticus. Other family dogs awaiting her were Waya, Thor, Bess, Doc, Mocha, Cleopatra, Sam, Gabriel, and her birth mother, as well as a large gathering of family cats. Schotzie was born on June 16, 2009 and was orphaned when her feral mother met an untimely death when Schotzie was only a week old. She and her littermates were rescued by Mitchell County Animal Rescue and placed in the foster home of Robert and Kim Mayhew, where they were bottle-fed and raised until old enough for adoption. Always the first to try new things and explore new places, Schotzie kept her littermates busy just trying to keep up. She made it very clear that she intended to stay in her foster home, so the Mayhews adopted her as her siblings found other homes. She soon showed that she had a mission in life and that was to help other foster dogs. She had a keen sense of the dogs who needed extra help due to being scared or untrusting of people. When a new arrival needed her, Schotzie would place herself on duty, sometimes spending hours beside the crate of a timid little dog, somehow communicating that it was ok to trust and be loved. She was a blessing to so many who needed her special touch. Schotzie demonstrated that some angels come wrapped in fur. With a name that means "sweetheart," she snuggled into the hearts of her adoptive parents and will always remain their "babygirl." She perfected "the look," puppy eyes, and used it to get whatever she wanted all through her life. Waya, a wolfdog, taught her to give wolf greeting kisses and she continued to greet other family dogs in the same way. In addition to her parents, she left behind her canine family Pugsley, Copper, Cody, Athena, Levi, Pheonix, and Lady Amelia. Her cat family already miss her playful chases as well. All look forward to seeing her again one day at the Bridge. Schotzie's family appreciates the rescue done by Mitchell County Animal Rescue in Spruce Pine, NC and the caring final arrangements provided by Adored Pets Cremations in Elizabethton, TN.

In the early morning hours of November 27, 2019, Schotzie took off on another adventure, but instead of running in the woods and creeks of her home she ran unexpectedly to the Rainbow Bridge during her peaceful sleep. No doubt she was met there... View Obituary & Service Information

The family of Schotzie Mayhew created this Life Tributes page to make it easy to share your memories.