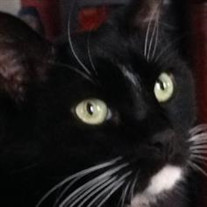 Oreo Nave July 7, 2007 – September 1, 2018 Our beautiful tuxedo cat, Oreo Nave, age 11, passed away peacefully, surrounded by love, hugs, and kisses, under the care of Tammy Sluss, DVM, Sycamore Shoals Animal Hospital, Elizabethton, TN, on Saturday, September 1, 2018. Oreo was born in Frederick, Maryland, along with several siblings. In December, 2007, Oreo was given as a gift to Spencer & Kay Nave, uncle and aunt of Ryan Farris, Walkersville, Maryland, to celebrate Kay’s birthday. You have left your paw prints upon our hearts. Oreo had a distinctive personality! He would “check out” all visitors to the home whether family, friends, or strangers. Everyone had to pass his acceptance test, no exceptions! Oreo’s Mom taught him how to box at a young age and Oreo was quite the boxing champ. He was king of his home and accepted each additional furbaby with love. You could literally tell what Oreo was thinking by simply looking at his eyes – they were very expressive and would indicate his current mood/emotion. If you wanted Oreo’s attention, you had to call him by name, otherwise, he would simply ignore you. Oreo had a very close bond with his Dad and greeted him every morning by sitting in Dad’s lap, purring up a storm, and snuggling in Dad’s beard. Those left to cherish Oreo’s memory include his parents, Spencer and Kay Nave, and feline brother, Tailgunner, of Elizabethton. Special friends include Dr. Sluss and her staff, Sycamore Shoals Animal Hospital, Uncle Tony Nave, all of Elizabethton, and Ryan Farris, Walkersville, Maryland. Oreo was preceded in death by his canine brother, Cheveyo, April 7, 2017, and his canine brother, Buford, July 27, 2018. If desired, a donation may be made in Oreo’s name to the Elizabethton/Carter County Animal Shelter, 135 Sycamore Shoals Drive, Elizabethton, TN., 37643. A special thank you to the staff of Sycamore Shoals Animal Hospital, Elizabethton, for the dedicated care, love, and understanding bestowed upon our beloved Oreo over the years. A very special thank you to Adored Pets Cremations, Elizabethton, for their support, kindness, and special care of Oreo, Buford, and Cheveyo. Your compassion and understanding made a difficult and sad time more bearable. Rest in peace, Oreo. We were so blessed to have you in our lives. You brought us much joy, hours of companionship and entertainment, and unconditional love. Your spirit now runs free and you, Cheveyo, and Buford are together once again. Watch over us, until we meet again…….R.I.P. Love, Dad & Mom Oreo Nave was cremated on September 5th, 2018.

The family of Oreo Nave created this Life Tributes page to make it easy to share your memories.