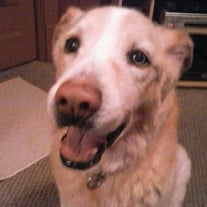 Murray O'Reilly Chandler August 27, 2003 - July 27, 2018 Murray O'Reilly Chandler crossed over the Rainbow Bridge on July 27th, 2018. He leaves behind his family, Candace Chandler (mother), Debra Chandler (grandma) and Wayne Mosley (paw-paw) Murray also leaves behind his "fur family" - Beatrix Woodby (wife), Edith Woodby and Zelda Woodby (his side wives) Murray O'Reilly Chandler was born on August 27, 2003 in Fayetteville, Georgia, the only boy in a litter of 7 born to a Yellow Labrador mother and a Siberian Husky father. He was adopted by his Momma at 6 weeks old at a PetSmart rescue event. It was love at first sight for his Momma but not for Murray as he was asleep when chosen. Imagine his Momma's surprise when she discovered that he had one blue eye and one brown eye when he was picked up at his foster home 2 weeks later. Murray loved napping, playing with his many toys, and being his Momma's "Velcro Dog" throughout his nearly 15 years of life. But above all else, Murray adored food. Chicken nuggets, fried eggs served on "Dog China" (paper plates), and ice cream were his all-time favorites. He hated bananas & pineapples (unless they were ensconced in a creamy frozen dairy treat) and pickles (unless they were in tuna or chicken salad). At his largest, he weighed 95 pounds with a deep, very menacing bark that inspired fear in anyone who entered his yard or knocked on his door. However, his family & friends knew that he was a gentle, sensitive coward who hid behind his Momma if confronted. Thunder and fireworks were his greatest unseen enemies & he sought solace against them by being held by his Mother or his Grandma while his head was hidden under the coffee table. He used his beautiful, expressive face & beguiling charm to gain both human & canine admirers as well as to obtain as much human food as possible. He was a dog of many nicknames, including Momma's Little Man, Grandma's Dog, PawPaw's Sea Breeze, & everyone's Murcress. He passed away on July 27, 2018. He is survived by his Momma (Candace), Grandma (Debra), PawPaw (Wayne), & all of his family & friends who will love & miss him forever. Murray O'Reilly Chandler was cremated on July 31st, 2018.

The family of Murray O'Reilly Chandler created this Life Tributes page to make it easy to share your memories.