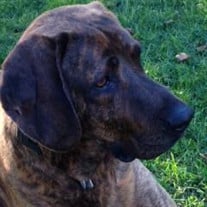 General Buford Thaddeus Beauregard Nave Plott hound General Buford Thaddeus Beauregard Nave, age 10, passed away peacefully surrounded by love, hugs, and kisses, under the care of Tammy Sluss, DVM, Sycamore Shoals Animal Hospital, Elizabethton, TN, on Friday, July 27, 2018. Buford’s birth date is unknown, as he was a stray brought into the Elizabethton/Carter County Animal Shelter, where they estimated his age at over one year old. Buford was adopted by his “furever” parents, Spencer and Kay Nave, in February 2009 from the Elizabethton/Carter County Animal Shelter. Buford attended the PetSmart Training School in Johnson City, TN and earned his graduation certificate. Even though he was over a year old, Buford still had a lot of puppy in him! Lattice, doghouse, back door screen, flowers, cabbages, etc., were no match for him. He must have had an iron stomach! Buford and his brother, Cheveyo, adopted in 2010 from the Elizabethton/Carter County Animal Shelter, had many backyard adventures and were “best buds”. Buford grew quickly into a very handsome 100 pound companion. Buford was eager to please, easy to train, and easy to love. His tricks included praying before meals, jumping through the hula-hoop, playing dead, and fetching. Buford had a very close bond with his “dad” and always tried to be a lap dog! He loved going on walks around the neighborhood, meeting and making as many canine friends as possible. Buford was a faithful watchdog, patrolling “his” domain throughout the nights. Those left to cherish Buford’s memory include his parents, Spencer and Kay Nave, and feline brothers, Oreo and Tailgunner, all of Elizabethton. Special friends include Dr. Sluss and her staff, Sycamore Shoals Animal Hospital, Elizabethton. If desired, a donation may be made in Buford’s name to the Elizabethton/Carter County Animal Shelter, 135 Sycamore Shoals Drive, Elizabethton, TN., 37643. A special thank you to the staff of Sycamore Shoals Animal Hospital, Elizabethton, for the dedicated care, love, and understanding bestowed upon our beloved Buford over the years. Rest in peace, handsome boy. We were so blessed to have you in our lives. Your spirit runs free now and you and Cheveyo are together once again. Watch over us, until we meet again……. Love, Dad & Mom General Buford Thaddeus Beauregard Nave was cremated on July 27, 2018.

The family of General Buford Thaddeus Beauregard Nave created this Life Tributes page to make it easy to share your memories.