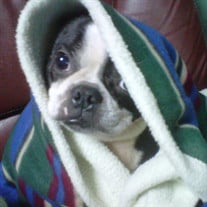 Atticus Mayhew crossed over the Rainbow Bridge on August 11th, 2018. One of his owners - Kim wrote his beautiful Tribute. Atticus Mayhew, born Nov. 15, 2007, went to the Rainbow Bridge on Aug. 11, 2018 after a short illness. Atticus, a Boston Terrier, was adopted by Bob and Kim Mayhew in March of 2008 and immediately gained status as “The Baby,” which meant he never was accused of any wrong-doing. He made sure to take full advantage of his status throughout his life! Atticus had many family members waiting for him at the Bridge, including canines Waya (a wolfdog who adopted Atticus as her own,) Dixie, Thor, Doc, Cleopatra, Bess, Sam, Gabriel, and recently deceased Mocha, as well as several feline family members. Living life to its fullest, Atticus went on unplanned hikes and spent much time attacking squeaky toys and his archenemy, the oversized tennis ball. He never met a blanket he wouldn’t burrow under. When he went into kidney failure several years ago, he refused to follow the vet’s recommendation that he be helped in his journey to the Bridge, instead bouncing back to live another 4 years. After losing his vision to glaucoma earlier this year, he devised a way to play fetch using his remaining senses of hearing and smell. He never ceased to amaze his people. Atticus leaves behind his adoptive parents, Bob and Kim Mayhew; his canine brothers Levi, Copper, Cody, and Sir Winston Pugsley; his canine sisters Schotzie, Athena, and Phoenix; and a dozen feline brothers and sisters, including Fluff Stuff who has one less dog to tease now. Sometimes the tiniest paws leave the largest prints on the heart, and that is certainly the case with Atticus. Atticus’ family is grateful for the caring final arrangements provided by Adored Pets Cremations. Atticus Mayhew was cremated on August 20th, 2018.

The family of Atticus Mayhew created this Life Tributes page to make it easy to share your memories.

Atticus Mayhew crossed over the Rainbow Bridge on August 11th,...