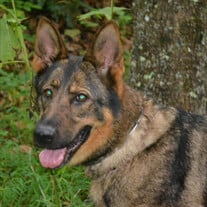 Athena Mayhew went unexpectedly to the Rainbow Bridge on the evening of July 23, 2020. Athena was a rescued German Shepherd Dog and it was thought that she was born sometime in 2010. Her early years are a mystery, but in 2014 she was rescued as a stray and eventually made her way into the adoptive home of Bob and Kim Mayhew, where she lived out her life. Athena quickly came to love and trust her adoptive mom, Kim, but she never warmed up to anyone else. She wasn't bashful with her barking, growling, and showing off her pearly white teeth, and in doing so became known as Athena-So-Meana to family and friends. She had an adoring fan club who enjoyed reading about her antics posted on Facebook. Athena was a true German Shepherd, loving, loyal, and protective of her chosen person. Bob was determined to be friends with her, and after years of giving her special treats while she growled, she finally permitted him to pet her, though she would keep a low growl going the whole time. Mom Kim called it "purring." Although she put on a tough show, she was sweet and gentle with other dogs. While she had a rough start with cats, she eventually grew to tolerate them and even take naps with her favorite kitty, Blaze. Since she wasn't the sociable type, Athena spent her days being her mom's constant dompanion, spending many happy days together peacefully at home and in her mom's studio. She was an amazing porch guard, keeping an eye on all directions while pretending to nap. Athena also loved car trips and the drive-thru food windows held a special interest for her, though she would always bark at the restaurant staff! In addition to her parents, who find the new silence almost unbearable, Athena leaves behind her special dog brother Levi with whom she shared many car rides and porch naps, dog sisters Lady Amelia, Phoenix, and Smidgeon, and a special feral rescue dog that she treated like her puppy, Cody. She was met at the Rainbow Bridge by those who went ahead of her, Schotzie, Sir Winston Pugsley, Copper, Atticus, Mocha, Thor and several others. It's comforting to think of them all together again, happy, healthy, and waiting for their people to join them one day. They are loved forever.

Athena Mayhew went unexpectedly to the Rainbow Bridge on the evening of July 23, 2020. Athena was a rescued German Shepherd Dog and it was thought that she was born sometime in 2010. Her early years are a mystery, but in 2014 she was rescued... View Obituary & Service Information

The family of Athena Mayhew created this Life Tributes page to make it easy to share your memories.

Athena Mayhew went unexpectedly to the Rainbow Bridge on the...